As we continue toward financial uncertainty and possible recession leading into 2023 and beyond all business owners should be seriously thinking about the things they may need to change in their business to not just survive but thrive.

I'm feeling reasonably postiive about things myself, but one important thing to note is that many of your current and potential customers will be looking for ways to manage the uncertainty in their own financial lives.

Should group coaching be a focus for your coaching business in 2023 to help guard against recession?

I think so. We've just released some brand new features to make group coaching easier and more efficient to run through our platform.

A few months ago I wrote a post about whether or not you should consider introducing group coaching into your coaching business to sit alongside your one on one coaching services. With uncertain financial times in our future it’s worth taking another look at group coaching. 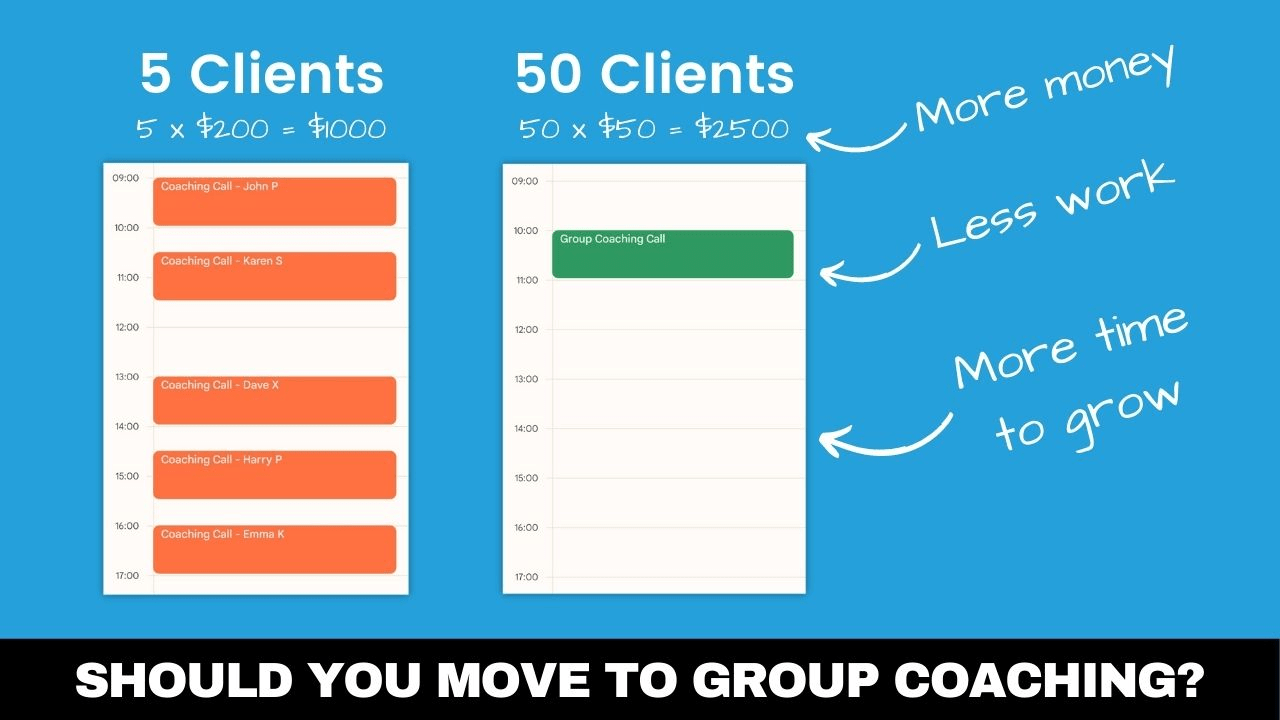 The post argues that group coaching can be a more effective and profitable model for coaching businesses compared to one-on-one coaching. Group coaching allows coaches to work with multiple clients at once, increasing efficiency and revenue, and providing a sense of community and support for clients which can lead to greater personal growth.

While being less expensive for clients group coaching is a scalable and sustainable business model, with higher potential for growth than one on one coaching services.

All these things make group coaching particularly well-suited for coaches looking to have a greater impact and build a progressive business during uncertain financial times.

If you don’t want to read the full post from back in June, here are the key points. Many of the reasons below make group coaching a great way to deal with the financial uncertainty to come over the next 1-2 years.

Circling back to the topic at hand, one of the main advantages of group coaching is that it is less expensive for clients compared to one-on-one coaching, which makes it more accessible and appealing during difficult economic periods.

In addition, group coaching allows coaches to work with multiple clients at once, increasing efficiency and productivity, which can be particularly important during times of financial strain.

At Training Tilt we want to help coaches to adapt and grow their business during challenging economic conditions.

We have just released the first version of our new Cohort Group Coaching tools that allows coaches to deliver coaching to groups very efficiently at any scale.

If you have a Training Tilt coach account you can read the full guide on how it works over on our support site.

It's helpful to use a real world example when explaining these features so in this post we will use a fictitious coaching business called "Titans Run Coaching".

Tim is the head coach of Titans and runs a group coaching program for a running event in Texas. Tim caters for both half and full marathon runners at various levels of ability and ambition.

Tim has running programs for three different levels for both half and full marathon distances. In total Tim has six 12-week running plans. Each person in his group based on Tim's advice will choose one of the running plans to prepare for their running race.

The plans are named below based on distance and level.

In the past Tim has created spreadsheets for each of these plans and shared those with his runners. This has worked for Tim but his runners have begun to expect something more interactive that they can access more easily with integration with their training devices and the ability to check their schedule and analyze their completed workouts in the same system.

Tim has decided to use Training Tilt to create his next group coaching cohort so his running group is easier to manage and his runners will get a more enriched experience during their training.

Tim has a few requirements based on how he runs his running groups.

When you create Training Plans in Training Tilt you can now configure them to be date based group training plans. This means when a client is given access to a plan it can be automatically added to their calendar on the correct dates for the group cohort without the coach needing to do anything. 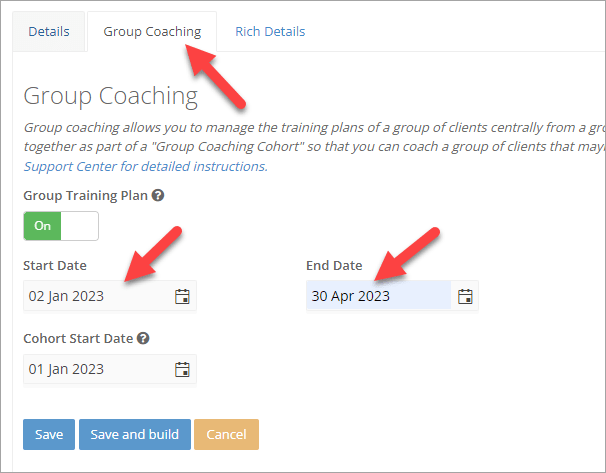 This allows coaches to build their plans on a date based training calendar. The coach doesn’t need to build the entire plan before they start promoting or selling as they can easily update and sync the athlete plans after training has already started. 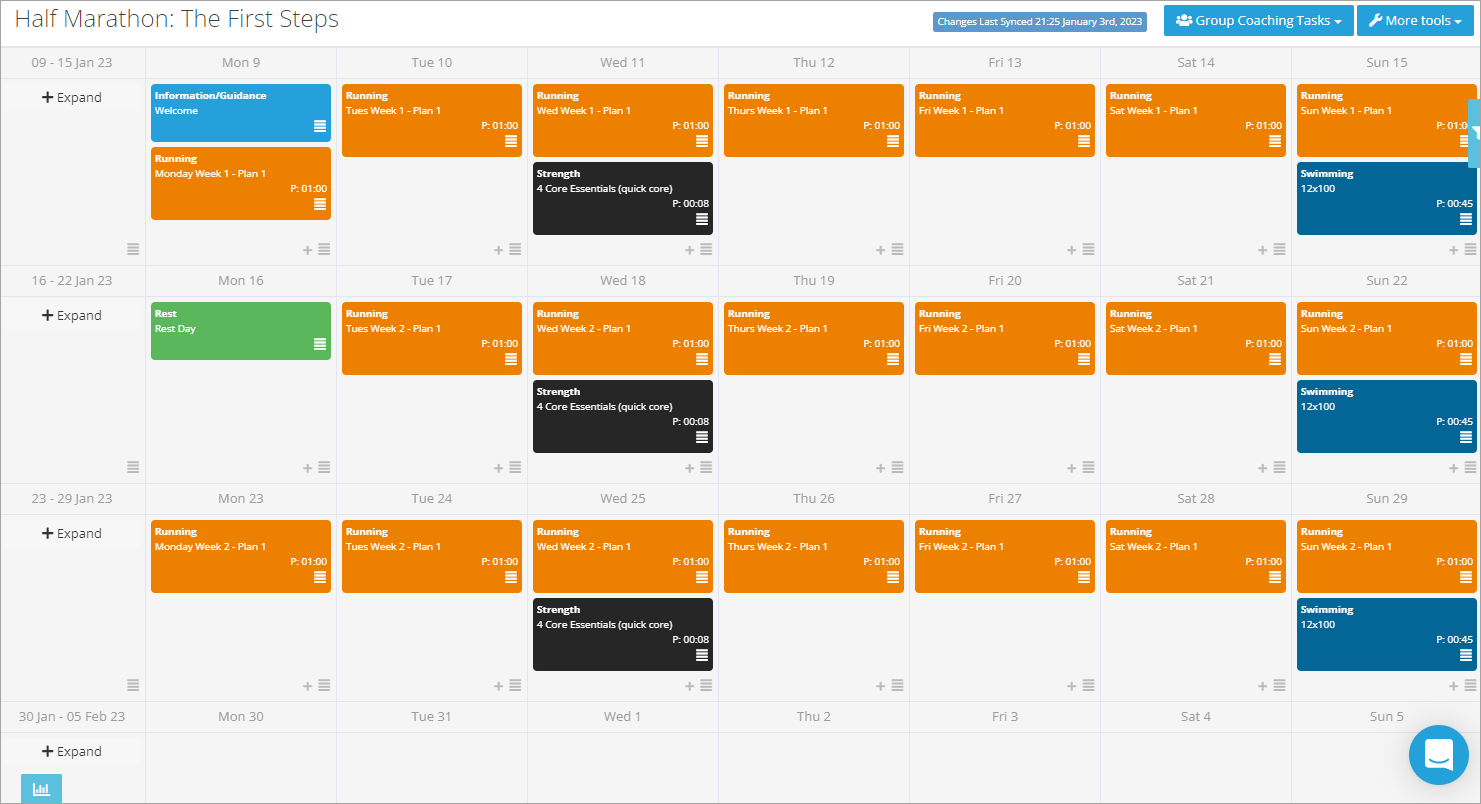 Coaches can create multiple plans and link them together using the “Cohort Start Date”. This linkage ties the plans together so that athletes can easily swap between training plans that have the same cohort date. It also allows for the same plans to be re-used by future groups by simply updating the cohort date before the new group cohort is due to begin.

Once all the training plan options have been set up coaches can then offer them for sale as part of a single “Membership Plan” by adding them as options. If coaches want to take payments outside of the Training Tilt platform they can also do this via our “Invitations” feature manually after purchase.

Once a customer purchases they can create their own training account in the coaches Training Tilt platform and the plan will automatically be added to their calendar on the correct dates. They can start training right away without the coach needing to do anything at all. 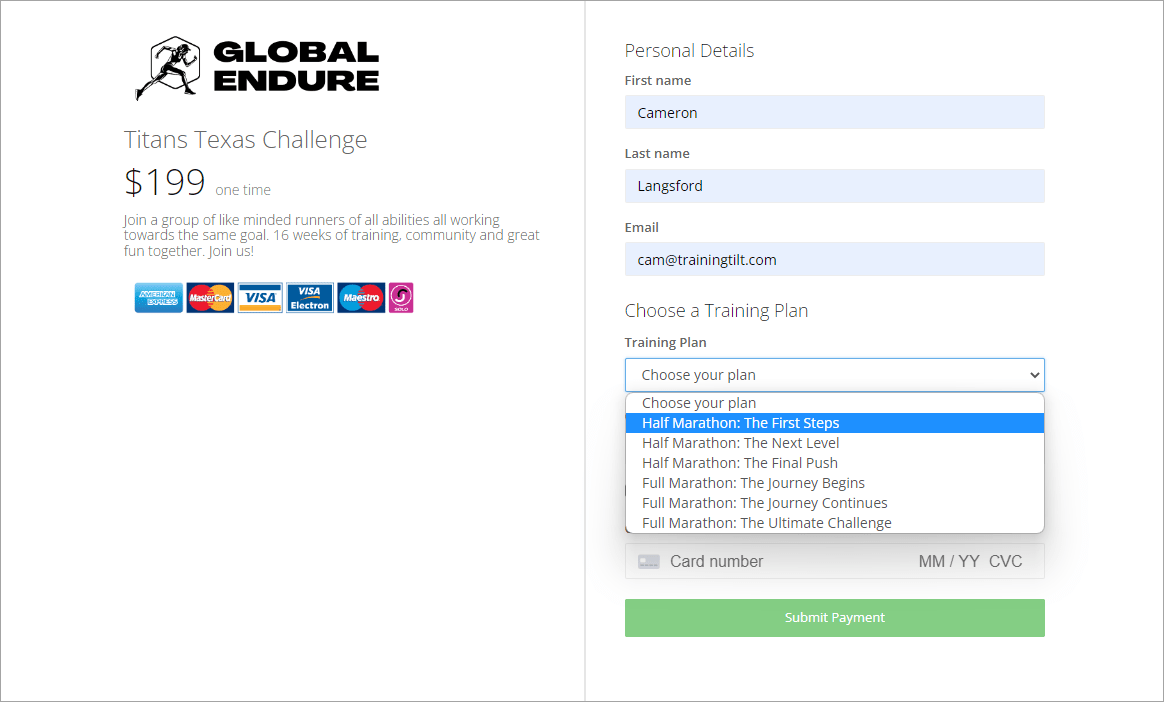 Coaches can continue to build the plan after the program starts as long as they’ve built enough training in advance for the athletes to complete. That way it save the coach spending too much time upfront before the programs start. It also means they can ease the athletes into the training without showing them too much of the program all at once.

It also means that if things change with the events, weather or anything else the coach can jump in, make the changes and then sync them with all athletes on the plan with a click of a button.

Often clients might choose a training plan that isn’t the best for the goals or abilities, they also may want to move up and down distances, between half and full marathons for example. Because all the plans have been linked together adding a client to one of the plans will automatically remove them from their original plan.

Once a group training cohort has been completed coaches can take the training plans and either make copies of them with a few clicks of a button or re-use the same plans by modifying the start and end dates and the cohort start date. 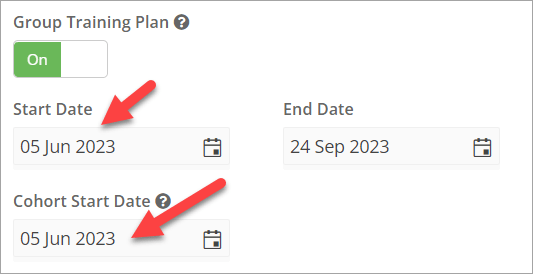 So, should you consider group coaching for your business in 2023? Definitely! It's a fantastic option for coaches looking to adapt and thrive during uncertain financial times. It's more efficient, allows you to work with multiple clients at once, and provides a sense of community and support for your clients. Plus, it's often more affordable for clients, which is a big plus during tough economic periods. Training Tilt just released some cool new tools to help coaches deliver group coaching more efficiently, so if you're interested in giving it a try, definitely check them out. If you're already a Training Tilt coach, head on over to our support site to learn more about how the Cohort Group Coaching features work or signup for a free trial of Training Tilt if you aren't one of our coaches just yet.