So, I explained to them why that wouldn’t be the case.

But I actually hear that quite a lot.

So, I wanted to go into a little bit of detail about that.

When you sell products to people, you need to, first, find out what people want.  Then you sell the product to them.

Just because you make a product, it doesn’t mean the same people who buy one-on-one coaching will then go and buy that product.

I've created a video version where I white board the concept so you can either watch the video, read the full text version with diagrams or both.

But, there’s this other big group of people here -- who are the self-coached or don't do any real structured training. These people aren't looking for one on one coaching right now but would be open to a little help from a training plan or some sort of online membership.

So, you might see this little overlap between the two groups here.  Potentially, this very small bit, here, are people who might move to one-on-one coaching to plans or some sort of online membership to get a little bit of help. 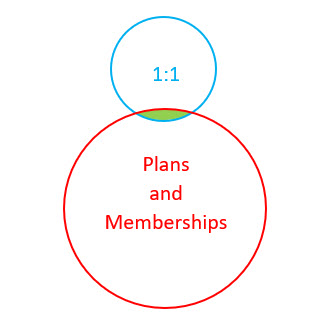 This is not big enough to worry about.  People who are in that group will jump from one to the other, anyway.

If you’re offering one-on-one coaching but not plans or memberships, the people in that group are most likely to jump to someone else who are selling those products.  So, you’re probably going to lose them anyway because they’re right on that border.

Here are some bullets to summarize

If you liked this article you might also like our post on whether you are charging enough for your one on one coaching. We cover pricing strategies and how to work through increasing your prices so it's fair for your clients but also your business.